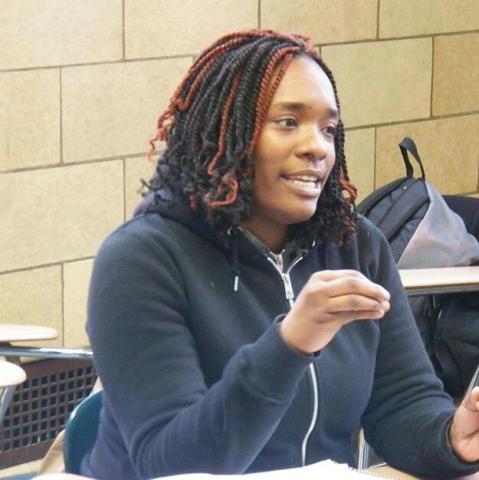 During her undergraduate studies, in 2013, Queen Benu became an active student organizer on campus as the Founding President and Program Coordinator of ClassAction Student Group – a research based, community organizing club she founded with some of her fellow Lehman classmates. The work of ClassAction Student Group opened the door to a successful collaboration with members of the Universal Zulu Nation for the 1st Annual Hip-Hop History Month Celebration: Hip-Hop Educational Summit held at Lehman College that year; this led to her joining the Universal Zulu Nation and within a year, Benu was awarded the title of Zulu Queen in November of 2014. She would go on to build the UZN’s Phoenix Queens of the Nation: Wisdom Born Zulu Chapter 29 that same month. The Phoenix Queens would become an officially chartered all-women’s Chapter within the Universal Zulu Nation on Feb. 11, 2015.

Queen Benu continued to organize on campus in her position within ClassAction Student Group, had a very successful first year with the women of the Phoenix Queens Chapter and assisted the Universal Zulu Nation’s World Council President and mentor, Zulu Queen Kenya, as a project coordinator. All the while, Benu handled her undergraduate studies, while also attending the CUNY Graduate Center as a Pipeline Fellow, where she produced her thesis project – Hip-Hop Pedagogy: The Universal Zulu Nation & Social Reformation through the New Philosophy of Afrikan Redemption. She successfully completed the program in May of 2015 and earned her undergraduate degree that September.

In September 2015, Queen Benu enrolled in the CUNY Graduate Center’s MALS Program, but decided to go on sabbatical after her first semester. While on sabbatical Queen Benu relocated to Newport News, Virginia, having joined the AmeriCorps VISTA program. For her VISTA assignment Benu is working with the Boys & Girls Clubs of the Virginia Peninsula in the areas of Teen Programming, Gang Prevention and Resource Development. She is also conducting her research in African Philosophical Thought, Hip-Hop Pedagogy, Community Education and Child & Youth Development. Upon completion of her research, Benu plans on returning to graduate school – this time working on her PhD in Urban Education with a focus on the Social Philosophy of Education.

It should also be noted that most importantly, Queen Benu is a single mother, raising a son who has been by her side during all of her accomplishments; learning, adapting and growing. Her seven year old son DeSean, is her case – study for her research in Hip-Hop Pedagogy and Community Education for Positive Child & Youth Development.

Department of Community Education and Research

The Department of Community Education Research is committed to creating safe spaces and educational programs and initiatives for children and youth ages 2 – 18 to thrive both academically and in life. The Department of Community Education and Research is composed of two programs: the Hip Hop Pedagogy Community Education Program which is designed to bring the classroom teaching and learning experience directly into the community for children and youth who for social and cultural reasons beyond their control, are not able to attend traditional schools and The WorldView/WorldSense Master Teacher Training Initiative is an intense in-the-field teacher preparation initiative designed to help develop the understanding, sensitivity and skill set needed for those who are committed to being effective educators who serve students of various social, cultural, economic and ethnic backgrounds.

We Write for Truth...

Benu Xanamara Ma'at
Cipher of the Master Teachers
unbolt me

Listen to your inner self..it has all the answers..

If you want to be a hero well just follow me

Musings and books from a grunty overthinker

Benu Xanamara Ma'at
Cipher of the Master Teachers
unbolt me

Listen to your inner self..it has all the answers..

If you want to be a hero well just follow me

Musings and books from a grunty overthinker